Code Of Behaviour are an Irish brass band based in Cork City. Their style varies between jazz, pop & funk & appeals to all musical tastes. The set consists of traditional jazz standards, mixed modern covers & originals. They are influenced by bands such as Youngblood Brass Band, The Hot 8 Brass Band & Booka Brass Band. Set up in September 2017, Code of Behaviour made their debut busking on the streets during the Cork Jazz Festival & are known for “livening up the streets of Cork”. The band consists of trumpets, trombones, mellophones, sousaphone and drums, with occasional singing (and dancing) thrown in the mix. Super sounds you won’t want to miss out on.

Look out for the group throughout the weekend along the famous Taste Trail! 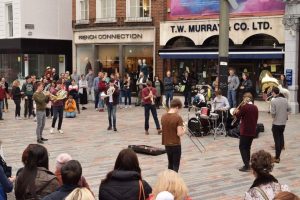